The official Twitter account of a nonpartisan Ohio county elections board posted that COVID-19 isn't as 'lethal/debilitating' as the 'liberal left news media' portrays it, in in a tweet Monday.

Wayne Darlington, an employee of the Summit County Board of Elections and a former official of the county Republican Party, admitted he posted the partisan tweet while mistakenly logged into the board's official account.

'I apologize,' he told the Akron Beacon Journal. 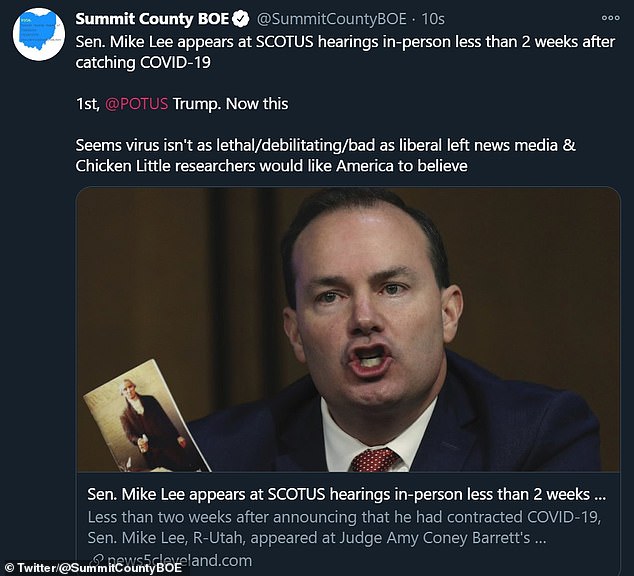 The official Twitter account of Ohio's Summit County Board of Elections posted a partisan tweet Monday that downplayed the lethality of COVID-19. Elections board employee Wayne Darlington, a former county GOP official, said he meant to post it to his personal account

'Seems virus isn't as lethal/debilitating/bad as liberal left news media & Chicken Little researchers would like America to believe,' Darlington wrote via the official account of the Summit County Board of Elections.

Sen. Lee spoke without a mask at the indoor hearing Monday despite testing positive for the virus less than two weeks prior.

Chicken Little is a character in a folk tale who repeatedly cries, 'The sky is falling!' after an acorn drops on its head.

As of Monday, more than 5,000 Ohioans and almost 215,000 Americans have died from coronavirus.

Darlington quickly deleted the tweet from the official Board of Elections account, swapped the order of two sentences, and reposted it to his personal account, where he said he had intended to post it.

In his role as administrative assistant, Darlington has control over the Summit County elections board's Twitter account, which typically posts non-partisan election information for voters.

Darlington has been working from home and staying away from the office because his immune system is compromised as he undergoes chemotherapy for colon cancer, he told the Beacon Journal. He's currently working reduced hours, which he tracks himself. 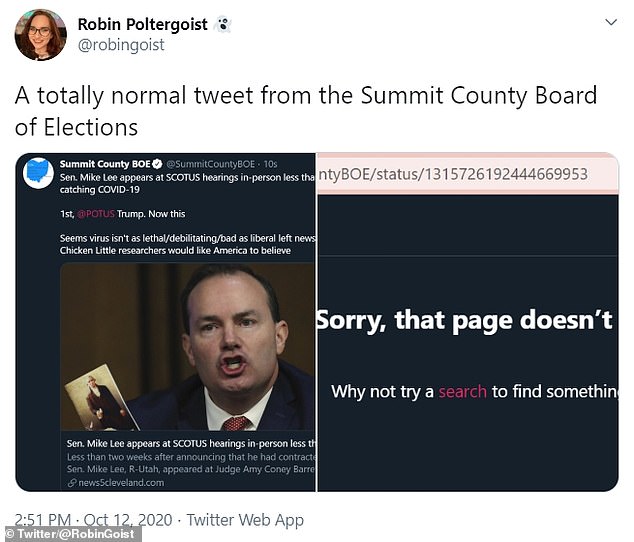 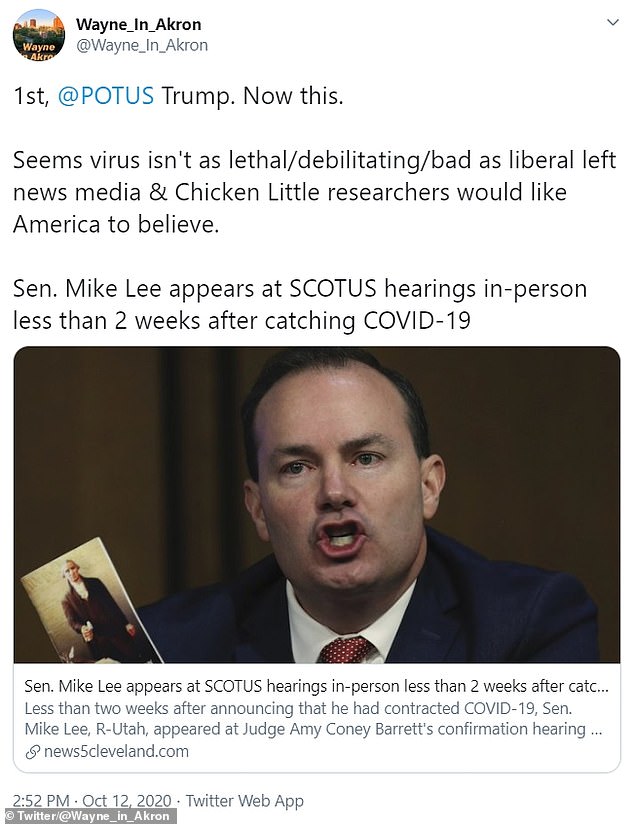 The board, which operates as a politically neutral entity to oversee elections in the county, has two Republican and two Democratic Board Members, all appointed to four-year terms by Ohio's Secretary of State.

Board chair William D. Rich told the Beacon Journal that Darlington's tweet was 'not at all consistent with board policy.'

Lance D. Reed, director of the board, told Cleveland.com the post was 'in no way the board's stance on the pandemic we are all striving to persevere through.'

In May the Summit County Public Health department cited the Board of Elections for not social distancing and not requiring employees to wear masks during an indoor meeting, according to Cleveland.com.

Darlington was the executive director of the Summit County GOP as late as 2016. He ran as a Republican for City Council of Akron in 2015 and lost in the heavily Democratic city.